[the following blog post was written by Dennis Jansen  – thanks Dennis!] 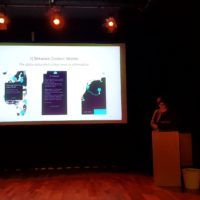 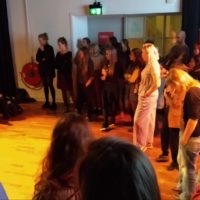 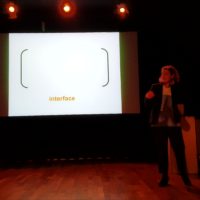 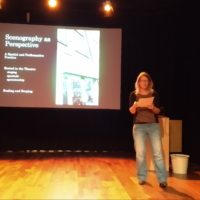 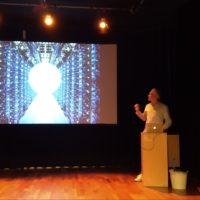 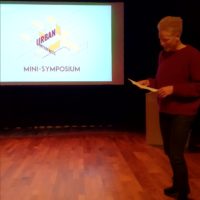 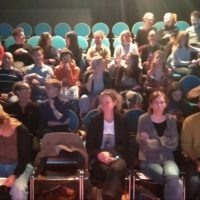 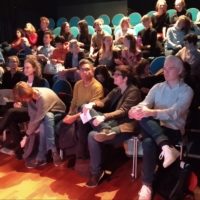 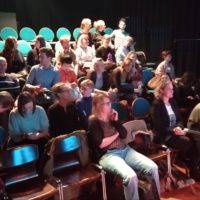 Interfacing with Connectivity: A Mini-Symposium Review

Review of the “Mini-Symposium on Urban Interfaces” by the [urban interfaces]  research group at Het Huis, 30 November 2019.

In celebration of the “Urban Interfaces” special issue of the Leonardo Electronic Almanac, edited by Nanna Verhoeff, Sigrid Merx, and Michiel de Lange, the titular research group organized a small event to offer a glimpse at the great variety of essays that have been included in the issue. The collection deals with fascinating topics that range from “how young refugees living in cities negotiate cultural differences in public spaces and through using their smartphones” (by Koen Leurs and Jeffrey Patterson) to the ways in which “innovative research interventions can […] facilitate an ‘interfacing’ of playful media, embodiment performance and urban place” (by Larissa Hjorth and Ingrid Richardson), among many others.

During the evening, two essays are presented to the audience. The first presentation is based on Eef Masson and Karin van Es’ piece, “Encounters at the Threshold: Interfacing Data in Urban Space.” In it, they analyze two mobile apps/artworks by Dutch artist and designer Richard Vijgen, who himself was present to introduce his work. According to Vijgen, the amount of data being produced is growing exponentially, but is also becoming increasingly abstracted, no longer visibly tied to specific physical carriers. Information no longer has a specific place in space—and we are not supposed to see it as such anymore either. With these developments in mind, Vijgen created Architecture of Radio (2015), an app that creates site-specific data visualizations, theoretical images of the different radio signals available in the user’s location. It makes the invisible visible again, even if it does so in a speculative way. The second work by Vijgen discussed in the essay/presentation is White Spots (2016), which similarly to Architecture visualizes cellphone towers around the user and subsequently asks where it is still possible to escape this connectivity. The app also features a world map which displays the reported cell tower coverage of all mobile service providers around the globe, making extra prominent the so-called ‘white spots’ where there is (so far) no connectivity. The user is positioned within a narrative of adventure, challenged to find the ‘terra incognita’ of non-connectivity—note the colonial undertones—and to add their own accounts of white spots to the app’s database. Interestingly, then, this functionality appears to reproduce the dynamics of user interaction and value extraction in social media that internet scholarship and art usually seeks to critique.

Masson argues that both apps are exemplary of artworks that explore the relationships between users and their lived and mediatized environments by making these relationships visible and available for contemplation. They also especially construct, encourage, and reinforce the desire to escape these relationships on the part of the user, a desire generally afforded only to those who are in the privileged position of already ‘being connected’, as Van Es points out. Both works sketch the highly informatized landscape brought about by data’s ubiquity, and thereby they make available our relationships with that landscape through their interfaces. They do so, as mentioned earlier, in a distinctly speculative manner: the network scanners in consumer-grade mobile devices do detect different data streams, but the produced visualizations are mostly simulations of a theoretical visibility of those streams rather than more direct representations. According to Masson and Van Es, these apps mediate and facilitate an encounter and the friction that comes with it, and this encounter happens not only in different layers of a technological stack but also at a metaphorical level—the interface as a ‘window’ into a reality normally only accessible by machines.

In the second presentation, Liesbeth Groot Nibbelink discusses her essay “Borders and Breathing Spaces: The Porous Interfaces of Urban Scenography,” throughout which she analyzes a performative research project that engaged with uninviting urban environments in order to argue that performance design is a suitable way of understanding interfaces in the city. One of her most crucial points comes at the very beginning: urban interfaces can be analogue too! Walls, doors, windows, decorations, facades—these all function as interfaces that mediate between the exterior and the interior of any given building. Performance design, also known as scenography, demonstrates that these features construct or stage particular relationships between the passersby (spectators!) and the building itself. The performance that Groot Nibbelink addresses, Live Action Research at the Amsterdamsestraatweg (Platform-Scenography 2016), called attention to the more uninviting urban interfaces and encouraged participants to explore the ‘porosity’ and ‘density’ of the facades in the titular Utrecht street. She shows that scenography pays successful attention to how such facades are always part of a relationship between front and back, but also to how they materially affect us and how they are entangled within wider socio-economic situations. The performance piece ended by telling participants to ring certain doorbells and to see what happened: some entered the ‘world behind the facades’ and were invited for lunch, breaking the barriers supposedly constructed by these porous interfaces.

Finally, Katherine Willis of the University of Plymouth offers a brief reflection on the issue’s broader themes. As an architect by training, she is concerned with making urban spaces ‘livable’ and the role that interfaces can play in bringing about that livability. She provides a salient critique of the urban interfaces we see around us today, and claims that much of the digital promise of ‘seamlessness’ is not visible in most urban interfaces: not only because most of them remain analogue, but also because many of the ones that are digital or connected are not seamless at all. In fact, most interfaces require expertise beyond simple movements and thereby lend agency exclusively to those who already possess the required knowledge to operate them successfully. The mini-symposium closed with a curious look towards the future, then: how to make a fair, just, and livable environment for everyone, and what will the role of urban interfaces be?

Dennis Jansen, MA is managing editor at Junctions: Graduate Journal of the Humanities and a student of the RMA Media, Art, and Performance Studies at Utrecht University.