The masterclass led by professor Janet Murray gave an introduction to the practices of interactive storytelling. In her text “A Tale of Two Boyfriends”, Murray introduces an abstracted type of storytelling that is called ‘W2P’: a formalist technique for stories in which a female protagonist encounters two partners. The premise of this narrative abstraction theory is that there are several character variations which have to be organized before one can create a meaningful and engaging story. When creating games, one has to search for a balance between computation and dramatic abstraction (Murray 121). Murray’s model, in this sense, offers a methodology that can be applied to several narration-based media technologies. By referring to mythological stories, Murray notes certain characteristics for both male (BOG and BOD) and female characters (GWEN). These attributes help to set guidelines for creating characters that raise the moral stakes of the story.
Departing from this method during the masterclass, we created a story set in a technophobic hippie commune. The story revolves around the GWEN character named Mia, the Father of the commune as the BOG, and the BOD named GUY, an Artificial Intelligence device. As Murray claims, ‘social conformity’ is one of the conditions that can attribute different features to the GWEN character (133). Starting from these traits, we conceived of our protagonist Mia as a smart, self-protective, opportunistic and curious woman, who nevertheless conforms to the commune life organized by Father.
Naturally, Father has a polygamous relationship with every other woman in the commune. As the BOG, he is idealistic, controlling and protective, which makes him hard to go against. On the other hand, the BOD, GUY, exercises an attraction on Mia’s curious personality, because he signifies freedom and a new life. Additionally, to increase the dramaturgical stakes for Mia, a ‘foil’ named Sister, was added to the story. Sister exerted a pivotal narrative function in our story, as she could either betray Mia by revealing her engagement with GUY to Father, or encourage our GWEN character to flee the commune life with her BOD. While Mia wants to be with GUY until the end of his (battery) life, she also faces the responsibility to conform to Father’s oppressive orders. Ultimately, she is torn between two conflicting worlds and love stories.
With regard to the interactive elements in telling this story, our group incorporated several narrative points where the player, from Mia’s perspective, is asked to make crucial decisions that will determine the outcome of the love story. Depending on which of the several paths is chosen, the story will conclude with either Mia’s stay in the commune or her escape, both with different variations.
The seminar showed us the various necessary steps one has to take in order to create an interactive story, that doesn’t dismiss but rather enhances the moral physics of the entire narrative, and ultimately contributes to the story’s engagement for its audience. With our background in (new) media studies, the introduction of the software tool Twine was also of interest to us, in the way that it can serve as a practical reflection on hyperlinking and interactive platform infrastructures. 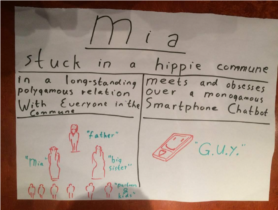 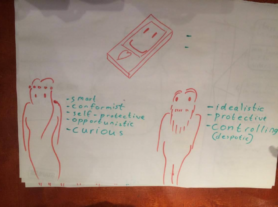