Welcome to Corporate Land; or, the City of Vanishing Street Art and Graffiti

One of the first things that struck me when I moved to Amsterdam was the apparent absence of street art and graffiti, however blurry and complicated the line dividing those two terms might be[1]. This was a striking feeling especially when comparing these urban manifestations to my experience in other cities where I have resided in the past; places where to clean or paint over a graffiti or a piece of urban art would render a public or private wall into a brand new space where new urban art would appear in less than twenty-four hours: a twentieth and twenty-first century urban palimpsest. This is not to say that I could not find any of these here in Amsterdam, that there were no instances of these cultural manifestations, these urban interventions, especially in the area where I set my residence: Nieuw-West. In fact, when these urban interventions appeared, they seemed to reveal a different side of the diffracting, multiple spaces that compose this city; or in other words, the different cities within the city. However, in the last couple of years a process of vanishing, of erasure of street art and graffiti seems to be taking place: Blank palimpsests in the form of empty walls where just a year ago graffiti abounded, buildings where the surviving street art, if any, oozes a feeling of abandonment and ossification. And this process of vanishing that seems to go hand-in-hand with a process of gentrification.

With this, I am not saying that the people in the neighborhood, those who are being gentrified away, would rather have every single wall covered in graffiti or urban art, that those living in this area for generations happily identify with this type of urban interventions. Furthermore, I would be wary of any simplistic approach to street art and graffiti that would unproblematically paint these cultural manifestations as representative of the multiple, diffractive and situated experiences in the neighborhood. What calls my attention is precisely the tension, the friction, inherent to this type of urban art; especially in times of gentrification, in times of privatization and corporatization of urban spaces. After all, who does not want a nice, clean, neighborhood, with great services, cafes and stores… especially, and this is of pivotal importance, if they can afford it. And that is precisely where this tension stems from, a tension between commodification and resistance; a friction between subversive art, the spaces where it is allowed to appear, and the assimilationist pull of neoliberal, corporate urban planning and expansion. This is a tension explored by Johannes Novy and Claire Colomb (2013) when they approach those urban policies set up in Berlin and Hamburg aimed at the commodification and assimilation of the idea of creative class. As they point out in the cases they analyze, “the subcultural capital [of the city] can be said to have been instrumentalized in … urban development policies carried out in the name of the ‘creative city’” (Novy and Colomb 2013, 1823-1824). However, the tension between resistance and commodification is not resolved that easily. As they highlight, the co-optation and commodification of subcultural capital, such as that of the creative class—and among which I would argue that street artists can be found—led to a resurfacing of the friction derived from the displacement and lack of access these policies entail. 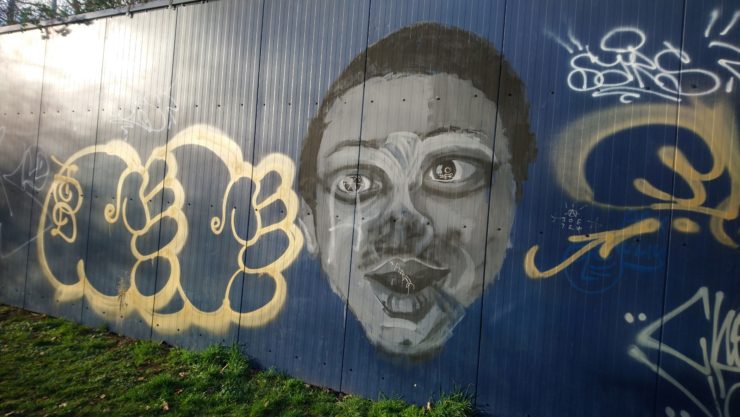 However, at this point, I would like to make a brief consideration regarding the term neoliberalism. If it struck me hard to find that street art in this city seemed to be disappearing, it strikes me harder to face people asking me: what is neoliberalism? Or what is a neoliberal society? Or who is neoliberal and who is not? And I am not talking about general conversations while in the supermarket, or while having a drink with friends, but about questions unironically asked by people engaged in critical thinking; whatever that means. Back in 1979, Foucault (2008) located the origin of neoliberalism in mid-20th century Germany and the United States; a point in space and time from which it began to swiftly spread to the rest of the world, especially in the last few decades[2]. In Foucault’s view, neoliberalism does not only represent a form of governmental practice, it represents a way of thinking, an all-pervasive and expansive way of subject production within a world framed in economic terms. This is accompanied by a set of window-dressing strategies where the apparent embrace of diversity actually hides a process of oppression and erasure of certain experiences. To put it in plain terms, in the case of street art and graffiti, they are embraced and can only appear under the premise that they play a role within neoliberal structures, and increase the market value of the new and gentrified urban space.

A clear example of this neoliberal process of assimilation can be found when regarding the well-known work of street artist Banksy, whose critical and subversive art has become a high priced commodity worthy of the most elitist action houses. This takes me back once more to my neighborhood of Nieuw-West, where graffiti and street art do not seem to be able to find that so priced corporate, neoliberal value. A place where the process of gentrification and commodification have deemed worthless these urban interventions and the people behind them; where the escalating costs of housing, shopping and living behind the new, clean walls of brand-new apartment towers are gradually displacing those lives and experiences for whom these controversial cultural expressions have a meaning beyond the neighborhood’s new market value. Perhaps, one of these days, I will look out the window and see every single wall in my street covered in graffiti and street art. Although, I am afraid that, were that the case, it would only mean that the corporate logic of gentrification had found the possibility of profit and further expansion through such a cultural—and most probably depoliticized—urban instantiation.