Simon Weckert’s artwork Google Maps Hacks offers us an angle to understand the way we perceive the surrounding environment through media technologies. It materializes the interactions between human and non-human actants. In doing so, on the one hand, this work questions how we construct a media ecology through technological devices as well as actual human activities and what the social consequences are it might bring about. On the other hand, it also reveals the material dimensions of the digital world – it is worth reflecting on the infrastructural and environmental issues involved in digital communications.

On one sunny day, media artist Simon Weckert was dragging his red handcart and strolling along streets in Berlin. The only difference between him and other passengers is that in his wagon, 99 phones were reporting their locations and movement back to Google’s servers. The feedback went processed and analyzed: according to the personal geo-location data from those phones, it seemed there was a huge amount of traffic slowly moving. Everywhere he goes, there would be a red line in google maps following him in the corresponding place. With merely one person, Weckert managed to cause a virtual “traffic jam” on Google Maps. 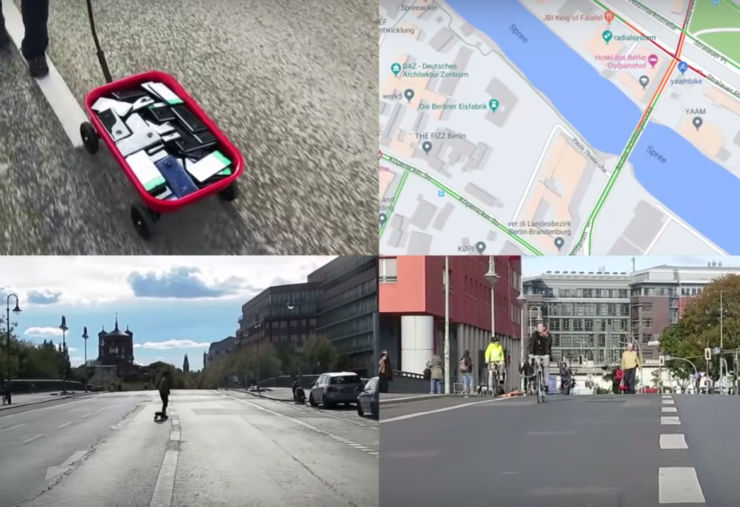 This is the artwork Google Maps Hacks Weckert (2020) performed this year, in order to show the digital map’s “impact in the physical world.” He concerns that Google map “has fundamentally changed our understanding of what map is.” Not like the classic maps that analog the environment as a whole, searchable and zoomable real-time digital maps render people options to only interact with certain part of the environment. As a result, this type of people’s interactions with digital maps are not only actively shaping the ways we perceive the surrounding environment, but also influencing how we participate in the physical world. For example, Google maps offers driving suggestions based on the real-time traffic data. When there is a traffic jam on one’s normal routine, it might recommend the driver to pick a narrow alley which is not mainly designed for cars and therefore causes more pressure on infrastructures and change one’s experience with certain urban spaces.

Google Maps Hacks can be beneficial to reflecting on how the media ecology we built has deeply intertwined with everyday life. Google map is a collective platform that represents reality based on crowdsourcing and feedback loop: the real-time traffic condition is reported based on user-generated data according to which users adjust their routines; the adjustments conducted by users will also reflect on the map and represent the real-time traffic condition correspondingly. The case shows that the experience we have about urban spaces and the ways we navigate ourselves through these spaces are mediated, and this huge cybernetic system is actively producing reality through tracking, collecting, analyzing, and re-orientating data.

Besides, Weckert’s work could also remind us of the material base of digital ecology. The data on digital media did not come from an entirely virtual and empty world. It is established based on the technological devices for transmitting signals, on servers for receiving and exchanging data, and on stations for storing histories. When we use digital devices to arrange our everyday life – especially considering our living experience is constantly mediated – it is necessary to discuss the related tangible environments which are often hidden under the rhetorical strategies to describe the intangible features of digital media such as being ‘virtual,’ ‘online,’ and ‘cloud.’

For example, digital wastes are those of which have been left out in the above rhetoric but remain unneglectable impacts on the environment. New materialist scholar Jussi Parikka points out that contemporary technological culture faces the dilemma that it can neither be reduced to the “hard” context and pollutions such as “CO2, toxic materials, and minerals,” nor to the “soft” bits such as signs, meanings, and desires (Parikka 2011, 97). She argues that in order to understand media, it requires a new epistemology to think beyond representation, signification, or correlationist predisposition, and to consider the non-human side of the existence. What comes together with technological culture is a complex ecology, a messy network in which one materiality is transformed into another one. For instance, depending on where it is placed and circulated, a magnetic stripe can be a component of a software or an electronic waste.

The present works in the field of infrastructure studies also help to approach the related environmental and material concerns on digital media, which bring the “materialities of media distribution” – the resources, technologies, labor, and relations in sustaining the audiovisual signal traffic on global, national, and local scales – into discussion (Parks and Starosielski 2015, 5). Through elaborating the examples such as google data center sites in the icy landscape of Hamina, Finland, or the signal transmitters bounded to a water tower in Lusaka, Zambia, infrastructure studies compel critical assessment of the relations between commercial digital technology companies and the public utilities and interests.

The reflection on the material side of the digital technologies stimulates the political potentials. It reminds us that the digital ecology in which we live is not only constructed through media technologies that are offered by certain companies. Rather, it involves complex systems that are based on collective efforts including data reporting from ordinary users and on public interests such as global environments. The artwork Google Maps Hacks gives a glimpse of how we could visualize and materialize the relationalities between human and non-human actants. Based on unfolding the complicated interactions, we could further explore alternative ways to imagine digital futures.