Urban Sounds and the Right to Headphones

The right to the city also involves the right to sound. The collectively shared tangible and intangible urban resources of urban life make up a soundscape is subject the variety of uses of the public space by strangers and you, making sound and silence urban common resources. The industrial sounds of building sites, busses driving by or people talking can create chronic street nuisances when not regulated (Foster 2013). The right to silence does not seem a possibility in public spaces, however, the introduction of mobile music players and headphones have given people the agency to create a personal soundtrack to ones time in public spaces. This personal soundtrack has two functions; it blocks out sounds of the world around you, but it also enhances your experience of this world by creating an auditory layer to your multisensory experience. Headphones create a private bubble, distancing you from urban reality, like Michael Bull demonstrates in his chapter on the ability to “remake the urban” through the use of mobile music devices like Apple’s iPod (2013). Emphasized in the marketing of the iPod, individuality proves to be a desired facility to be combined with the use of urban commons. The personal soundtrack seems to enhance the urban experience, somewhat similar to how Parisian flaneurs in the second half of the nineteenth century performed their occupancy of the streets for strangers to be watched, but not to connect with those strangers (Harvey 2008). The sight of headphones signals a disconnection that again can cause a chronic street nuisance in the use of urban commons, because it creates an intangible communicative wall. 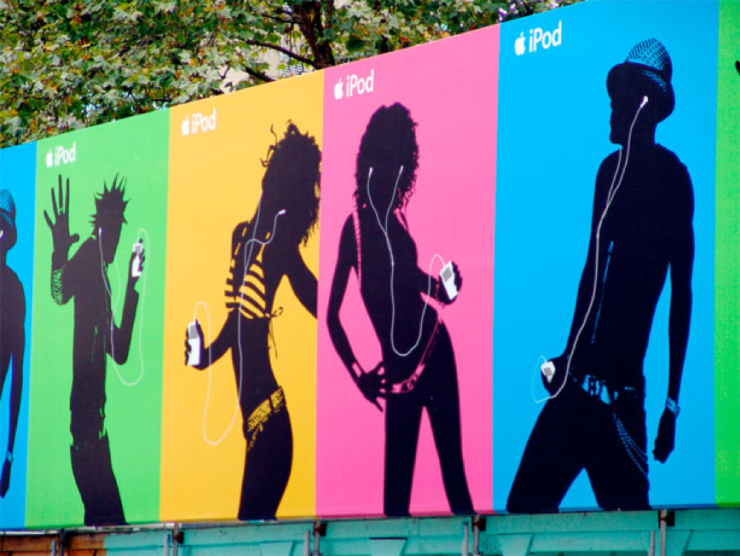 iPod advertisement, expressing the ideal of individuality signified by the white earphones on the silhouettes in 2001 by Apple inc. by AP images

The following example shows how the ability of headphones creating a comfortable bubble has been used to reverse the individuality commonly associated with the wearable technology. Over the years, flash mobs and silent discos have been combined to evade laws about playing music over electronic speakers in public spaces, but still being able to temporarily transforming the urban space in a dancefloor. This collective action is enabled by the authoritative rule limiting options for playing music in public spaces, pressing the need for the creative alternative: a silent disco. Connection through music has proven to be effective in creating a feeling of like-mindedness and overcoming boundaries. If you search on YouTube for Silent Disco Flash Mobs, you will find demonstrations of people suddenly gathering in a public space (usually a square) in cities around the world, dancing to music only they can hear by wearing headphones, for example the ‘Disrupt the Norm’ event at Granary Square in London. Another video from 2011, titled ‘Biggest Flashmob ever in Eindhoven with Headphones,’ we see a similar flash mob happening at the Piazza square in Eindhoven, where a DJ on a bike and some people in on the plan hand out wireless headphones playing the DJ’s music. The fact that strangers can join the flash mob makes this an interesting case, because it shows how the visual act of wearing headphones, together with knowingly hearing the same music, connects people in such a way that they create a collective occupancy of the public space that makes people comfortable to dance, scream and clap “like no on is watching.” The act is specifically meant to reach out to the people passing by that are watching, to signify how they are the outer circle versus the safe inner circle. In occupying the space by their dancing, creating a physical circle, they also sing along to the music, clap together, sonically occupying a far wider area. Playing the same music over multiple peoples’ headphones thus expands the comfortable bubble of the individual headphone user.

This shows how collective action can result in a reclaiming of the right to sound or the right to relative silence. With everyone occupying the public spaces within their private bubble of multimedia, their sight locked on their phone screen and their ears blocked by earphones playing their choice of music, there are not many senses available for (casual) connection and communication with strangers. What if people had the chance to choose to knowingly listen to the same music as strangers surrounding them? As blasting your music in public is annoying and thus regulated by authorities, there might be ways of visual representation possible in future geomedia apps, showing in a layer of augmented reality the song played by the person wearing headphones, maybe with the possibility of joining the listening session, creating your own “silent disco” and connect with strangers through music. One can imagine this would have people choose their music like they choose their clothes, like a flaneur picked out certain clothes to express himself on the Parisian boulevards, we would pick music to express our urban identities.