The Urban Frictions graduate seminar 2017-2018 provided insights into the intricate processes of developing, as well as analyzing urban interfaces, as a way of engaging in contemporary discourses on the impact of exponentially growing mediatized urban environments. In this reflection, I will use Rafael Lozano Hemmer’s Body Movies (2001), which was introduced during the last session, as a theoretical object and reflect on some of the diverse topics that were introduced throughout the Urban Friction seminars.

Body Movies (2001) is an interactive installation that occupies the walls of large architectural structures in different cities around the worlds. A large number of the city dwellers’ portraits are projected with the help of robotically controlled projectors. These can only be exposed by the projected shadows of the people that are walking by. The projectors have been placed in such a way that they can create shadows up to twenty-five metres high. The installation also includes a video surveillance tracking system which automatically projects new portraits once all the present ones have been exposed. In this reflection I would like to show how Body Movies (2001) not only illustrates, but also informs, challenges and expands the understanding of existing concepts within the field of urban studies. More particularly, I will reflect on how Body Movies (2001) can be related to the four trajectories of the development of media which give rise to the notion of “geomedia” as introduced by McQuire, namely, ubiquity, location awareness, real-time feedback and convergence. Moreover, I will elaborate on how Body Movies (2001) transforms the way public space is experienced on a conceptual, as well as corporeal level. This analysis will also elaborate on how specific designing strategies, exemplified by Body Movies (2001), can ultimately offer a revised understanding of the concept of agency, which reflects the intricate role contemporary mediatized environments play in shaping urban life.

For McQuire, the ubiquity of 21st-century media refers to the progressive mobility of digital media that have generated profound changes in the way citizens understand and engage with public space. This does not suggest that fixed media platforms have ceased to exist, but that social interactions are not only shaped by material urban infrastructures but also by digitized, immaterial communication practices that can transcend the local and situational specificities of a designated public space (Mc Quire 10). The proliferation of installations like Body Movies (2001) provide a renewed understanding on how media can be situated in public space, and how it can reconstruct public space. Body Movies oscillates between the two poles that characterize the fixation and ubiquity of contemporary media. On the one hand, it designates a revised understanding of the fixation of media which moves from private space to urban space. The spatial requirements for the actualization of the installation create specific limitations regarding the space and locations where it can be placed. On the other hand, the dramaturgical choices and use of digital tools, such as the presence of a surveillance tracking system, are reflective of the ubiquity of digital practices that pervade urban life and transform social practices. Therefore, Body Movies arguably functions as a manifestation of a selected aspect of immaterial processes that occupy public space.

The second trajectory identified by McQuire is that of “location awareness” and signifies the “enhanced role of location in framing both the functionality of media devices and the content they access and generate” (12).  The increasing use of location tracking services embedded in mobile phones and the ways that they are being used by a wide range of applications has transformed the underlying processes that shape urban life; for example, how people navigate through the city, how people use the public transport systems, how people meet and socialize. At the same time, the pervasiveness of location tracking services raises important ethical questions regarding issues of privacy and surveillance. Body Movies engage with these discourses by juxtaposing the element of anonymity and the presence of a surveillance tracking system. It introduces an element of playfulness and offers an alternative perspective as to how surveillance tracking systems can be implemented and interpreted within an urban setting and in a way distort their transparency. A very interesting point that appeared during our discussion was how this degree of “projected” anonymity generated a liberating effect/ generated a sense of freedom for the participant to engage with other people and with the urban setting in unconventional ways. Thus, on the one hand, Body Movies exemplifies points of friction that arise due to the rapidly changing and technologically enhanced urban environments; and, on the other hand, it offers a playful intervention and a seeming blurring of the power potential assigned to surveillance services and location tracking application.

The next trajectory that signals the emergence of geomedia is that of convergence, and it indicates a reconfiguration of the technical specificities of old and emerging media. More particularly, “[c]onvergence breaks down the differences separating older mediums such as photography or broadcast television from the computing and telecommunications sectors” (12). McQuire uses the term convergence to indicate the development of the technical specificities of old media due to technological advancements, but also to pinpoint the versatility and diversity of new technologies that shape urban life, and which increasingly incorporate the formal qualities of older media (McQuire 12-13). Body Movies exemplifies convergence by reframing how different media and different technologies are used and combined in order to create a unique reappropriation of and re-occupation of a public space. It also serves as an example of how such combinations can be manifested and materialized, opening up the space for reflection on how this and other potential recombinations are informing urban life. The installation is also indirectly reflecting on the way public space has been capitalized and used for marketing purposes due to the affordances of new technologies, transforming otherwise plain walls into screens; creating aesthetically uniform interfaces amongst different technological devices and platforms. These could be considered alternative points of frictions that emerge from the commodification of contemporary mediatized urban environments. At the same time, Body Movies gives to the citizens the chance to re-occupy that space differently by manipulating the affordances of these technologies in alternative ways.

Closely connected to the notion of location awareness is the ability to capture and distribute events in “real-time”. Real-time feedback challenges on an ontological level the prominence of representationalism, but also introduces new layers of social interaction and communication and, ultimately, reconfigures how time and space are experienced on a collective level (McQuire 12). Real-time feedback allows people to experience events live, overcoming physical limitations. In this context, mediation can be more closely related to the formal characteristics of the medium, rather than levels of interpretation that take place when an event is being communicated. In other words, mediation does not necessarily require a level of representation (McQuire 12). Moreover, having access to events, or information about events that are taking place, in real time has the potential to mobilize citizens in different ways. The notions of presence and participation acquire new meaning, especially when it comes to social events. It is not only the possibility to observe events taking place in locations all around the world. Real-time feedback allows citizens to occupy public space in alternative ways, having the potential to engage with what is happening in a more direct way. As McQuire argues, real-time feedback creates “the potential for new forms of recursive communication and coordination between diverse actors even as events unfold” (12). Body Movies incorporates the qualities of real-time feedback in its design through the way that the surveillance tracking system has been programmed to switch the projected photographs once all the present ones have been revealed, allowing participants to become part of the “narrative” of the event as it is unfolding. At the same time, by juxtaposing the representational qualities of the projected photographic images the participants are able to create new narratives based on their engagement with the installation. Ultimately, this form of interaction suggests an understanding of agency which is shared between the various elements of the installation.

The dynamic construction of meaning and the representational potential of Body Movies (2001) suggest that agency is not a one-directional property of a few dominant actors. The artists’ dramaturgical choices are not dictating the outcome of the interaction. Instead, the interface is bringing forward specific environmental and technological affordances, making the participants co-creators. Agency can then be understood as the ability to facilitate a change within an emerging system and cannot be attributed to specific actors. In other words, agency becomes distributed, amongst human and non-human agents. This aspect also opens up the potential for understanding criticality as an enactive practice in conjunction with reflection. By embracing the corporeal agency, facilitated by the design of the interface, the participants are able to reflect on the implications of the installation not only as distant observers, but also as actors and co-creators. It is their movement that instantaneously constructs new narratives, by superimposing their shadow on the projected images. It is their own body and their presence within that particular urban space that makes the portraits visible. At the same time, the rate at which the projected images progress is also dependent on the actions of the other participants. Therefore, agency is also manifested on a collective sphere. Ultimately, the experience of that particular urban space is being transformed by the presence of the installation. By engaging with the installation, the participants are going through a process of defamiliarization of the space and consequently its re-appropriation.

Overall, the transparency of the design and the environmental affordances of the installation Body Movies could be seen as presenting a specific perspective into the underlying digital structures that shape urban life, but also provide an insight of how human agents are part of a networked social landscape. It opens up the space for reflection on the role that humans play in the construction of the existing, and constantly evolving, digitalized and datafied urban environment. Moreover, it invites critical thought on issues of privacy, interpretation and representation of surveillance systems and processes. Finally, Body Movies invites its participants to explore new ways of occupying public space, by physically engaging with material and digital urban structures and with other people. 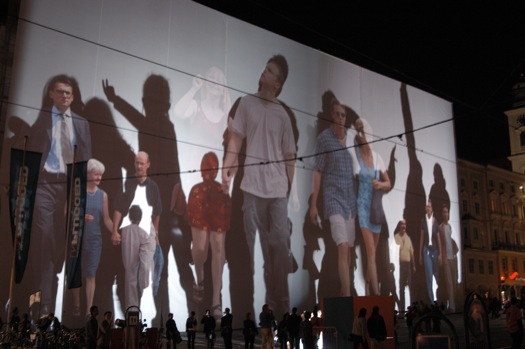