Re-centralizing the Human in More-Than-Human

In the context of the current environmental crisis that our planet is facing, more and more disciplines are refocusing their attention on taking what Lupton (2019) has dubbed a more-than-human approach to understanding the world. This perspective involves recognizing the various ways in which the human and the “nonhuman” interact, thereby reconceptualizing how we think about agency, the (ir)regularity of meaning in relation to both human and nonhuman artefacts, and the centrality of humans to a wide variety of subjects (Lupton 2019). While environmentalism was once a subject strictly tackled by the sciences, one discipline that increasingly sees individuals concerning themselves with the matter in meaningful ways is the arts. As Dewey (2005) once pointed out: whereas sciences succeed in stating meanings, the arts prevail in expressing them. It comes as no surprise, then, that this more-than-human perspective is also steadily making its way into the arts, but what are the limits to this development?

One individual whose (artistic) work is increasingly reflecting the perspective is Daan Roosegaarde, and particularly his Glowing Nature project seems to emanate its ideas. Part of the larger Icoon Afsluitdijk project – which aims to raise awareness of rising sea levels and the risk the phenomenon poses to the Dutch Afsluitdijk – Glowing Nature allows individuals to interact with age-old microorganisms which light up upon disturbance, providing a glimpse into a future where technology and nature coexist peacefully, generating light and energy from clean, biological sources (Studio Roosegaarde n.d.). So, where in this project are these more-than-human ideas evident, and how useful are they really? 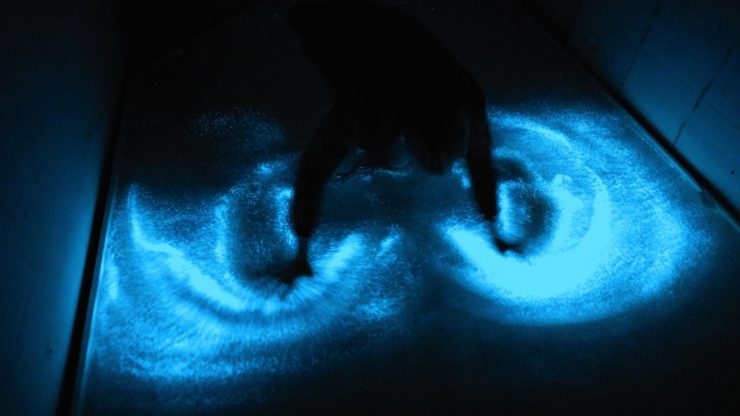 Roosegaarde’s approach not only presents these glowing algae so that humans are directly confronted with non-humans in what could – considering the continued research his studio is doing into these algae for their application in powering streetlights (Studio Roosegaarde n.d.) – become an everyday context, but does so while emphasizing the joint agency of the two in this endeavor: by interacting with their environment humans can create light using these organisms, stemming from a biological reaction that occurs within them by nature, but are only granted this agency due to the algae’s natural abilities. This very act also draws attention to the sensory- and material aspect of how we interact with our environment(s) and draw meaning from them, a meaning which by no means is constant. This is demonstrated by the fact that this particular species of algae is reportedly over 700 million years old, and it is only now that humans are starting to develop the ideal conditions in which to keep these algae alive in a way that benefits our direct needs, but doesn’t infringe on those of the algae or any other natural phenomenon (Studio Roosegaarde n.d.). All in all, the project raises awareness of the interconnectedness of humans with everything around them, providing an effective example of how we can interact with our environment(s) in ways that bring our surroundings into the forefront of our attention, inspiring others to dream big and pursue similar practices.

Though these aspects of the work do try to de-centralize humans within the context of our daily interactions, the question of whether a more-than-human approach is even entirely possible – and thereby useful – remains, especially within the arts. Dewey (2005) conceptualized the concept of aesthetics in relation to the arts as one defined by experience, which he sees as stemming directly from the interaction of an organic self with its environment. In doing so, Dewey (2005) effectively connects the aesthetic experience of an artistic object with human’s everyday experiences, proposing a continuity between the experience of said art, and the various social relations that the context of civilization imply. This aesthetic experience is also very much present in Glowing Nature, where, despite the focus on a non-human source of light, the experience of creating light with these algae can only be understood in relation to the other sources of light we use in our daily lives, and an imagination of how these algae could be utilized within civilization in the future. Even with all intentions of taking and presenting a ­more-than-human approach, then, arts – as outlined by Dewey (2005) – are inextricably entangled with a human-centric view of the world. 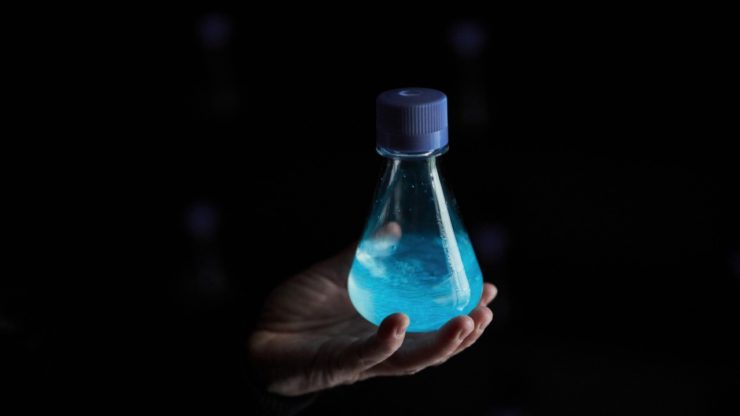 And perhaps such a view is not as problematic as often perceived. After all, we are humans: we (cannot help but) understand the world in relation to ourselves and others like us, and it is due to our rapid development that environmental issues are even a matter of concern to begin with. Decentralizing ourselves from the way in which we understand these issues – as a more-than-human perspective often entails – then, is almost like trying to relinquish the responsibility of correcting our wrongs. This is not to say that we mustn’t look beyond the human in the face of the current environmental crisis, but it should be recognized that even the way in which we aim to set things right is inextricably entangled with a vision of how humans can coinhabit our planet. In that sense, in their inability to separate aesthetic experience from human society and civilization (Dewey 2005), the arts provide an effective platform through which to raise awareness, inspire, and eventually tackle the environmental problems we face today.