We face a crisis of imagination.

These are the words of Roy Bendor (2018, 132). Bendor refers specifically to our inability to imagine what a sustainable future might look like. Before we know what measures to take, socially or economically, we first need to be able to image an alternative to our current situation. How might we overcome this crisis?

Bendor proposes so-called “worldmaking interactions.” Specific interactions (think of media installations) can invoke us to imagine alternative futures. Interactive media can provide us with examples of what the future might look like. They could challenge existing views on the future by proposing their own. Or they could even make us rehearse an imaginary. Make us feel like we are living in someone’s imagined future (Bendor 2018, 158-59).

I had the opportunity to step inside someone’s view of the future during a performance at De Brakke Grond in Amsterdam. The festival Beyond the Black Box showcases hybrid artworks, including a performance by Stav Yeini, called The Senders. 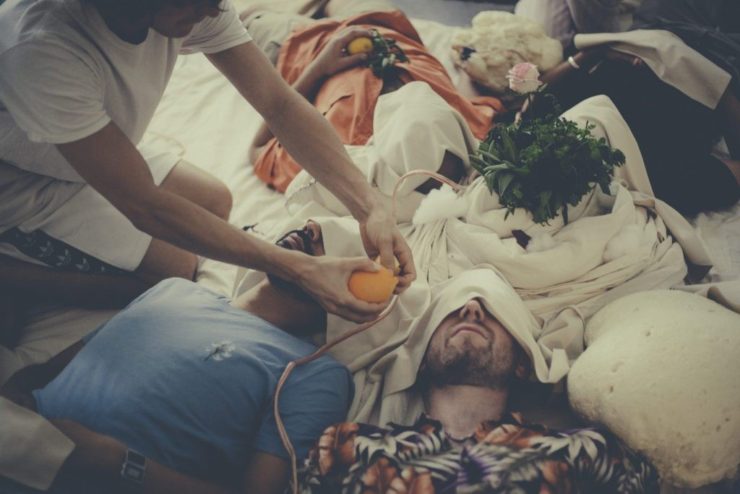 I entered a room, and was asked to lay down on a soft mattress, while the performers covered parts of my body with blankets. What followed was a sensory experience. The performers waved cloths with essential oils near my face, placed vibrating rocks near my body (and real rocks on my body) and played relaxing rhythms over the sound installation. We were surrounded by more non-human objects, such as plants, on which technological sensors were placed. These sensors seemed to measure “the life” of the plant and transform it into sounds.

During this performance, I noticed how quickly you can become immensely aware of your senses. A blanket weighted down on my legs and kept them comfortably warm. When I had become adjusted to feeling the blanket, one of the performers very slowly pulled it away from my legs. Instead of just noticing that this blanket was being pulled away, I imagined a receding wave, washing over the sand. While this was happening, I could not resist to smile. Someone simply removed a blanket from my legs and it felt like an unknown sensation that triggered all kinds of imagery in my head.

I would say that The Senders, in the words of Bendor, provided me with an imaginary of the future in which both human and non-human entities lived amongst one another, without a pressing hierarchy between them. The performers expressed an alternative world view. Instead of using objects, we listen to them, smell them, feel them.

There was just one thing. While I was able to relax to a certain extent, in the sense that I could focus on my senses and imagine scenarios in my head, I was never fully indulged in this world. During the entire performance, I felt like I was on the edge. I was waiting for something to disrupt my seemingly blissful state. The awareness that this was art never faded. In my previous experiences, artists walk the fine line between immersion and defamiliarization cautiously. Just when you are feeling sympathy for a character in a story, they turn out to be a villain. You were deceived.

What I was expecting, was friction.

Roy Bendor came to visit us during the seminar of Urban Ecologies. He mentioned several examples of designs that were made to stir people’s imagination, based on friction. Friction can make us think, it helps us progress. Imagine that you are wearing an oxygen mask, and answering questions about your own sustainable behavior. You chose not to recycle? Less oxygen for you. Quite harsh, but it does make the consequences more tangible.

So, where was the conflict in this performance? I was waiting for something to disrupt me. Someone to wake me up from this dream. Who would yell at me and laugh. How could I lose myself in this utopia where I was one with my surroundings?

The performance ended in the same peaceful state as it started with.

This made me think. Was this art, or was it a meditative session? Was this really a vision of the future where humans are sharing their space with non-humans in an equal way? This could hardly be so joyous. Or could it?  It made me think nonetheless. Therefore, it fulfilled its duty as a rehearsal of an imaginary. Maybe my own frustration with the performance was the conflict that The Senders aimed at. Is the search for friction maybe too human? Do non-human entities add a harmony to life? Or, is this hippie-language in my last sentences exactly what this imaginary calls for?