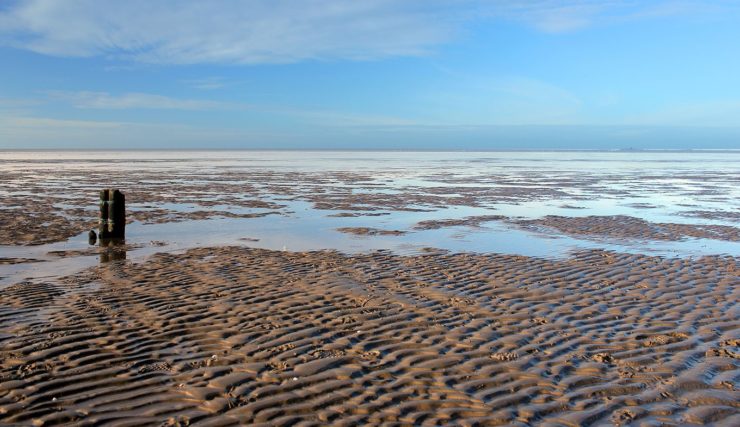 The Wadden Islands – stretching from the northwest of the Netherlands through Germany all the way up to the west of Denmark – are environmentally fragile and protected areas. One of the remarkable aspects of the area is that the sea is completely drained on low tide, allowing people to walk across from the mainland to the islands. Attempts have been made in the past to permanently drain the sea between Groningen, Friesland and the islands. This has been pushed back and prevented by the environmentalists trying to protect the precious Wadden Islands. Because of its remarkable ecosystem, the Wadden Sea is included on the UNESCO World Heritage List. They coin it as “the largest unbroken system of intertidal sand and mud flats in the world, with natural processes undisturbed throughout most of the area,” celebrating its intertidal ecosystem and its faunal diversity. However, due to the effects of climate change and ongoing drilling for natural gas in the nearby province of Groningen, it has become more and more difficult to protect the delicate ecosystem of the Wadden Sea. A more-than-human approach to sustainability could help sustain the life of this delicate ecosystem, since it is exactly the human footprint that is harming this natural reservoir.

In line with Donna Haraway’s idea of “staying with the trouble” – pursuing a focus on the here and now rather than the ideal of futurism – the case of the Wadden sea will be approached from Haraway’s ideal of making (odd)kin (2016, 2). With this perspective, it is about staying with the trouble rather than refuting it, it is about making unexpected combinations between humans and nonhumans, and it is about adopting an attitude that is engaging with the seriousness of the trouble rather than adopting a cynical “game-over attitude” (4). Staying with the trouble allows us to engage with matters that are about more than humans. Acknowledging that the human is not the center of attention makes it much more likely to creatively engage with the trouble that is awaiting us. In the case of the Wadden sea, there is the ongoing problem of salinization; the fresh water in the sea is evaporating and the supply of it is decreasing due to the depleting supply of meltwater in the Rhine, leaving the salt-levels to increase continually, causing radical changes to the flora and fauna of the Wadden Sea and islands.

One initiative that resembles a more-than-human approach that is about staying with the trouble is the strikingly simple idea of embarking in saline agriculture on the Wadden islands. This project accepts the problem of ongoing salinization and works with it. Rather than growing produce for non-saline agriculture – the food that we have grown accustomed to – the saline agriculture works with what they have rather than tries to change it. I believe this is what making oddkin is about, or as Haraway argues: “We require each other in unexpected collaborations and combinations, in hot compost piles. We become-with each other or not at all. That kind of material semiotics is always situated, someplace and not no place, entangled and worldly” (4). It is about accepting the fate of a changing ecosystem and adapting the way we become with this newly formed reality. Rather than desperately clinging to our established ways of doing agriculture, it is about becoming-with the environment we are a part of.

Stichting Sint Donatus – the project that is responsible for saline agriculture on the Wadden islands – is about becoming with the Wadden Sea. This project is aiming to protect the fauna of the Wadden Sea and to embark in saline agriculture. The most successfully grown produce is sea kale, which has been into an artifact of saline architecture. Sea kale is being pushed to be incorporated in the nature and culture of the Wadden area. This, in turn, is embraced by the local restaurants on the Wadden islands that make use of locally grown produce and locally fed animals. It celebrates the uniqueness of the Wadden area’s ecosystem. I would argue this is exemplary for a more-than-human approach. A project such as this is about living with the ever-changing environment of the Wadden area without embarking in the kind of futurism aiming to change nature for the purposes of human life. Instead, the salinization is attempted to be halted by protecting the flora and fauna of the sea while embracing the changing circumstances that arise from this phenomenon. Encouraging people to eat sea kale while spending their days on the Wadden islands embodies a staying with the trouble in the sense that the public is made aware of the changing environment while celebrating how change could also result in projects that are about more than just humans.