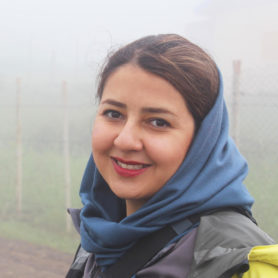 Delaram Ashtari (1989) is a PhD Candidate of Urban Planning at the College of Fine Arts, University of Tehran, Iran. She holds a Master in Urban Design and a Bachelor in Urbanism from the University of Tehran. In these two programs, she ranked first among all graduating students. She is interested in the transformations of urban spaces as social productions in the 21st century. Hence, in her doctoral studies, Delaram focuses on the effects of digital media and mobile technologies on urban space, citizenship, and urban design in Iran.

Delaram will join ICON as a visiting researcher from March to August 2017 and will actively contribute to the [urban interfaces] research group. During her stay at Utrecht University, she will work on a project entitled ‘Hybrid Space and Its Reproduction in Urban Space: Interaction of Digital with Physical for Shaping Hybrid Urban Spaces’ as a part of her PhD thesis. The main purpose of this research is to explore how new media and mobile technologies in hybrid urban spaces can affect active citizenship and civic participation in urban design process in the Global South (Iran in particular). Hence, she has a comparative approach to this topic (between developed and developing countries) and will try to study different urban contexts in cross-cultural and interdisciplinary environment of ICON.