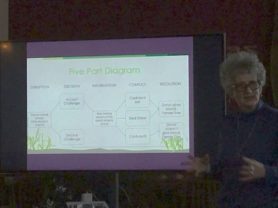 Practically this meant that we had a chance to create our own narrative drawing upon the classic love triangle scenario. The task in general was based on Murray’s article “The Tale of Two Boyfriends” which presents a female protagonist who is torn between two suitors – Boyfriend of Obligation (BOG) and Boyfriend of Desire (BOD). This work was a main guideline for the exercises presented to students. The core conflict of said storyline was then used as a starting point for the participants (divided into group of 3-5 people) to create their own set of characters, including a protagonist, two suitors and a foil for the protagonist who were then assigned various personal characteristics and background stories. As a next task, groups positioned their character in the stories that had several twists and three possible outcomes, adhering to a five-act structure proposed by Murray. At the end, groups vividly presented their narratives and discussed the results. 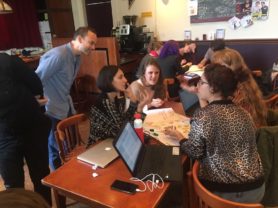 Looking back on this both educational and entertaining experience, it is important to point out key-learnings that we encountered during the event. First of all, Murray’s setup or structure can be instrumental for a creation of a compelling narrative from scratch. It was a revelation to learn how a certain set of rules does not limit creative freedom, but rather focus it to a point where great ideas can flourish and continuously be built upon. The actual exercise only lasted for less than two hours, and within that timeframe, all groups felt that interesting characters and backstories, as well as complex narrative universes and (hilariously) tragic conflicts were created and presented. That set of exercises illustrated the basis for creating a viable storyline that is crucial not only for literary work, but also as a structural foundation for interactive storytelling in digital practices. Being given an opportunity to explore various possibilities for plot construction, participants had a chance to take a closer look at the intricate and complex concept of narrative, which presented valuable knowledge as well as methodology.